I then took a risk and asked him if he believed that Ampelmann was one
of the few contributions the GDR was allowed to make to unified Germany.

He laughed and said, “Yes, Ampelmann and not much more, perhaps
nothing more.”

The Ampelmann illustration came up frequently among these former
East Germans as we spoke of the refusal of the West Germans to consider
the GDR’s potential contributions to unified Germany.


The realpolitik of German unification was that the FRG had taken over
the GDR and then gone about dismantling the latter’s institutions. Given
this situation, there was every reason—sociologically—for the West
Germans to “abwickeln” the cultural, artistic, and knowledge-producing
institutions of the GDR.

Indeed, not one of the many members of the Academy with whom I spoke
uttered anything approximating a sense of being “set free” by the closure of
the Academy. Ironically, they did feel “superfluous” to the West Germans
scientists and academics who had been sent to evaluate them. In their view,
these panels did not evaluate their work and instead functioned as the official
basis for the termination of two-thirds of the Academy’s employees.
Approximately one-third of the Academy’s scientists and scholars were
offered positions, typically two-year contracts, at universities or research
institutes.

...
Another person I re-interviewed, a historian from the Academy who was
able to continue on in his career, pointedly said to me, “As you are a
sociologist interested in our collective identity, let me be clear: The
Abwicklung is not an interpretation or social construction of reality. It is a
matter of fact that the West Germans took over the GDR. This is not open
to discussion; it is what happened. For instance, as the Academy came to its
end as part of the terms in the unification treaty, our workgroups were
broken up. This dismissal of many of those at my institute and the scattering
of others to various institutes was detrimental for our intellectual careers. To
our regret, we were all treated as individuals by the Wissenschaftsrat process—
some kindly, many unfairly and rudely.”
“It is most important to point out that we from the East were socialized
to do research collaboratively in groups. . . When this work sharing arrangement
we had at the Academy came to an end, those of us who received
contracts had to adapt quickly to the Western model of the individual
competitive scientist.”
“I personally cannot complain because I was offered a good position in a
West Berlin institute and accorded respect and intellectual freedom by my
supervisors and colleagues. My supervisor said to me, ‘Please carry on the
research you were doing.’”
“Some of my work from GDR times was well regarded among the West
Germans and I’m not an abrasive person—this was critical, I think, to my
survival. However, many good people I know were not as fortunate as I
have been. The important point, to say it again, is that the GDR was
brought to an end as a matter of policy. A relatively small number of
individual academics and scientists were folded into, and even welcomed
into, the West Germany system.”
“By the way, I believe that the workers suffered greater economic hardships
and displacements than did the intellectual class. I’m sure you know
about the massive industrial and manufacturing plant closings, the
Treuhand’s activities, and the resultant high unemployment rates which
persist to this day.”
...

I asked everyone at some point in these 2014 interviews, “Do you know
how many were dismissed from the Academy and the GDR universities?”
Here is a summary of their responses.

None knew of any studies or data sources amenable to investigating this
question of what happened to those two-thirds working at the Academy
who were dismissed, those let go from East German universities, and various
GDR media institutions such as radio, television, and print. They all
reported with certainty that about one-third of those working at The
Academy of Sciences were offered contracts in 1991 or shortly thereafter
to carry on their careers in West German institutions. The remaining
two-thirds were left with what in their eyes were second- and third-choice
options. One was to enter into ABM (Arbeitsmaßnahmen), a program for
the unemployed; another was to enroll in one of the so-called integration
programs, where the loosely conceived idea was to allow GDR scholars,
academics, and scientists to apprentice—at low pay and typically low or
ambiguous status—with West German academics for a period of time as a
sort of retraining and acclimation or acculturation program. Others, some
of whom were either highly sought after by colleagues in other nations, or
disgusted at their treatment by West Germans, or faced accusations
of collaboration with the Stasi, emigrated to find work and a new life.
A few took up the daunting challenge of beginning their own businesses.
Some unknown numbers—probably a tiny minority—committed suicide
(most of those I interviewed in July 2014 had a tale of someone who had
taken their life). Still others felt forced into early retirement or denied
scientific or governmental positions because they were formally accused of
moral turpitude for in some manner collaborating with the Stasi. Those with
various technical skills found work in private industry; others, typically those
with good spoken and written German language skills and deft at logical
thinking and social interaction, found work in business offices as low-level
managers or sold insurance.13 And some drove taxicabs to earn a living.
A historian who was positively evaluated by the Wissenschaftsrat that
reviewed his Academy institute reported, “I felt treated fairly by the
Wissenschaftsrat, but disadvantaged when I had to compete for academic
positions. A central reason was that I was in competition with the
oversupply of West German PhDs from the FRG. East Germany presented
an unprecedented opportunity for this oversupply of West Germans to
receive positions in former GDR universities and become full professors—
or at least receive full academic appointments. They would then establish
their careers here in the East and attempt to return to a more prestigious
university in the original FRG states.”
“It was a very uneven process and it is difficult to generalize for you
except to say that we East Germans were typically discriminated against in
our pursuit of career opportunities.”
“Can you give me some examples or criteria of this discrimination?” I
asked him.
“Well, a critical factor is that we, GDR academics, had no social networks
and, therefore, no power to access these positions. The West Germans of
course had the networks and, therefore, the power to control to a great
extent who would receive these jobs. For instance, if a professor supervises a
student’s doctoral studies he, this professor, has an interest regarding his
prestige in seeing to it that the student finds a good academic position. To
illustrate, I was for a time at Bielefeld [University] and I can assure you that
it was unthinkable that an East German could rise to a full professorship.
The general attitude there was that we East Germans were ‘rural’ and more
or less primitive. This was subtle, not openly displayed and not all West
German academics shared this view—some did not know they held it. They
just exhibited it in their expressions and conduct.”
“Nonetheless, I count myself as one of the fortunate ones who was able
to have an academic career after the Academy was closed. In this moment,
however, looking back, in some ways it might have been better if I had
simply been dismissed like so many of my colleagues at the Academy. It has
been a very hard twenty plus years in the FRG academic system.”
A sociologist recounted her institute's unpleasant treatment when visited
by the Wissenschaftsrat evaluation panel as if this incident had occurred
recently rather than twenty-four years in the past.
“I was a practicing sociologist, and still this panel treated me as if I was a
naïve or somewhat ignorant schoolgirl, asking questions as if I did not know
the basic principles of sociology. They also showed no collegiality towards
my fellow Academy colleagues. It was all top-down, ‘We West German
sociologists know and you East Germans do not know’—that type of
situation. And then, to my surprise, they gave several of us a positive
evaluation and I was given a contract to come to this university, where
I’ve survived numerous contract renewals over the past two decades.”
The academic couple mentioned above gave this account of their adaptation
to the German capitalist economy, “The Turn arrived when we were
mature professionals [in their thirties], and we both set out to re-orient
ourselves to the new economic reality. In the GDR we had received strong
technical training, and an education grounded in systems thinking, which
we felt encouraged independent thought and action. . . On the other hand,
. . . we had limitations: . . . insufficient Western European language skills,
and a lack of . . . personal computer skills and knowledge of how to engage
in what we call self-marketing.”
“We felt professionally on a par [with West Germans] and were generally
treated well by western colleagues. . . We observed and experienced first
hand that [East Germans] could find employment on the basis of sound
scientific-technical, medical or linguistic skills. However, it would be in a
low-paying entry-level position, even if you had many years of professional
experience.”
“Interestingly, we also met West Berlin or West German colleagues who
felt disadvantaged because of . . . the sudden . . . flood of technically and
otherwise competent East Germans who could be hired at low wages.” 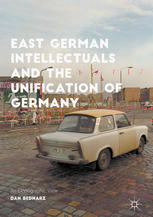 "I'll miss you" he said, and pulled the trigger.

A day of historic battles. Many Serbs

are still agitated over their loss in the Kosovo battle, but you would be hard pressed to find any Swede

who really cares about the loss at Poltava more than three hundred years later. pic.twitter.com/6FqDYR03Mo